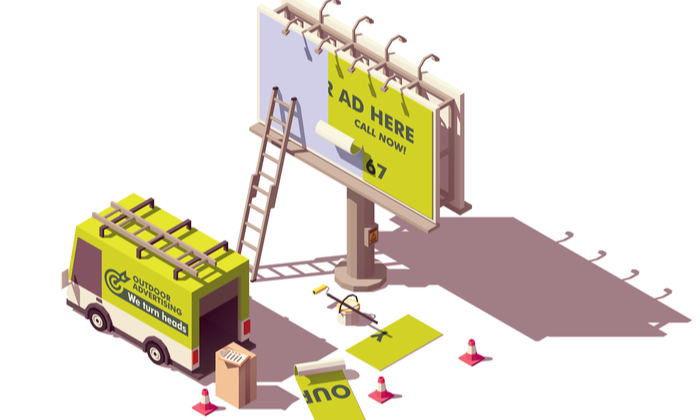 What Is Out-Of-Home Advertising

Out Of Home Avertising – In our digital world, it might feel like all marketing is done online. But, that would mean ignoring an incredibly effective strategy—out-of-home advertising.

Out-of-home advertising (OOH) refers to the process of reaching consumers while they are, you guessed it, out of their homes.

While this may conjure images of NYC Times Square billboards, there are many mediums that qualify as out-of-home advertising.

The best news is, these methods are highly effective.

In fact, according to the Out-of-Home Advertising Association of America, 66 percent of smartphone users took action after interacting with an out-of-home advertisement.

Additionally, 74 percent of those who visited a business after interacting with an out-of-home advertisement made a purchase.

Those are some pretty compelling statistics that should make you think twice about adding out-of-home advertising to your campaign’s strategy playbook.

Not sold? Check out the below infographic that identifies which advertising mediums consumers trust the most. See number five? Out-of-home advertising comes in way ahead of search ads or sponsored posts.

Out Of Home Advertising As Fifth Most Trusted Mode

In short, if you’re not considering out-of-home advertising, you’re missing out on valuable leads.

While we already mentioned the NYC Times Square billboard, there are less ubiquitous mediums for out-of-home advertising. These include:

While it is unlikely your organization will opt to sponsor a blimp, there are many options for marketers looking to establish new sources for attracting new consumers.

Much like any advertising or marketing campaign, your execution is only as good as your plan. There are six must-have steps to help you get your out-of-home advertising campaign off the ground.

Regardless of your out-of-home advertising campaign’s goals, you need to do some research on the location.

This information will not only inform the size and limitations of your ad but will also help you decide which locations are worth your budget and which are not.

Imagine you’re a local restaurant in a pedestrian-heavy area. Advertising your drink specials with a clever slogan on a chalkboard is going to be much more beneficial than a billboard with the same message.

Conversely, if you’re a car dealership offering end-of-the-year deals, a billboard is going to be a much better strategy than a sign outside of your building.

When it comes to location, you need to ask four specific questions:

After you’ve answered these three questions, you can start building your out-of-home marketing strategy around these answers.

Just because you’re advertising out-of-home doesn’t mean you have to go technology-free. Digital billboards are a great alternative to conventional billboards. In fact, here are three reasons you should consider opting for a digital billboard.

The Economist created a clever digital board that turns a lightbulb on over the head of a walker, connoting the idea of wisdom shared through the publication.

Tips For Successful Out Of Home Advertising Campaign – The Economist

Beloved US baseball team The LA Dodgers created enthusiasm for their upcoming games by using a countdown on their digital billboards that ticks down to the second.

Oreo took advantage of a current event by using the hashtag #oreoeclipse.

Tips For Successful Out Of Home Advertising Campaign – Oreoeclipse

Whether your billboard is responding to current events or simply underlining your product’s main value proposition, getting creative is a surefire way to find out-of-home advertising success.

Below, we discuss five strategies that can make your billboard outperform its neighbors.

The true litmus test of a successful marketing campaign is action. If your out-of-home advertisement drives people to talk about or share your advertisement, then you can consider the ad a success.

Looking for inspiration? Check out these out-of-home advertising ideas that had people talking.

CVS made a big splash with their #BeautyUnaltered campaign.

The digital billboards encouraged viewers to upload their unfiltered selfies as a tie-in with the companies’ dedication to using unedited photos of models.

In the Ad Council’s Out There for Us campaign, the organization featured out-of-home ads that thanked front-line workers during the COVID-19 pandemic through real quotes.

The ad asked viewers to Tweet their thanks using the hashtag #OutThereForUs, encouraging interaction and then further sharing those quotes.

Tips For Successful Out Of Home Advertising – Ad Council Billboard

Before wedding yourself to a location, see if your competitors are using similar strategies in similar locations. What works in their ads? What are they missing?

Use these answers to capitalize on what they missed.

Keep in mind that placing an out-of-home advertisement close to your competitors’ sharing lower prices or better quality could work for you, but it could also have unintended consequences. (Like a price war.)

As you wade into the world of out-of-home advertising, be sure to follow the basic tenets of any marketing campaign.

Regardless of digital or conventional, your campaign must have clear, quantifiable marketing goals to assess success.

Do you want to:

To confidently determine if your campaign is reaching its aim, be sure to establish SMART goals. This acronym refers to concrete goals, achievable over time. These goals should be:

By fitting your goals within these constraints, you establish aims that are quantifiable, rather than nebulous.

By going all-in on an out-of-home advertising campaign, Pepsi was able to grow three percent in Q1 of 2019, not to mention scoring tons of social media reactions and interactions with their hashtag #ColaTruce.

Examples Of Great Out Of Home Advertising – Pepsi Bus

While your budget may not be quite as large as Pepsi’s (the beverage brand’s budget was $1.7 million), you can still draw inspiration from this campaign that made out-of-home advertising work in their favor.

2019 was a good year for out-of-home advertising.

In September, The Dallas Cowboys took out-of-home marketing to the field, launching interactive “Pose with the Pros” kiosks at their stadium.

Through this interactive campaign, fans could snap pictures with virtual likenesses of the players.

After taking the photo, users could choose to share the image on social media or email it to themselves or others.

While on the surface, this campaign was simply a treat for Dallas Cowboys fans, it also had another motive.

Fueled by AT&T, the out-of-home advertising campaign allowed the company to demonstrate their 5G technology prowess.

The result AT&T CMO claimed: “We were able to create experiences that let people know how fundamentally different 5G is from LTE.” Not to mention some pretty happy Cowboys fans.

When you think of running, you don’t necessarily conjure the Reebok logo.

But all that changed when Reebok ran an out-of-home advertising campaign in Sweden that challenged passersby to run at a speed of 10.5 mph in exchange for a free pair of the brand’s ZPump 2.0 shoes.

Example Of Great Out Of Home Advertising – Reebok Sneaker Kiosk

The campaign took off, earning 300,000+ views on YouTube and 30,000+ shares on social media. Invariably, next time anyone who interacted with that billboard thinks of running, they’ll think of Reebok.

Whether you want to add to your existing digital marketing strategy or go fully OOH, there are many mediums you can use for innovative advertising.

From billboards to park benches, the out-of-home advertising opportunities are endless.

However, OOH advertising should be viewed as a long-term campaign—it’s unlikely that you’ll see the same immediate success experienced with your digital campaigns.

But don’t get disheartened. The return on investment for your OOH campaigns is definitely worth the wait.