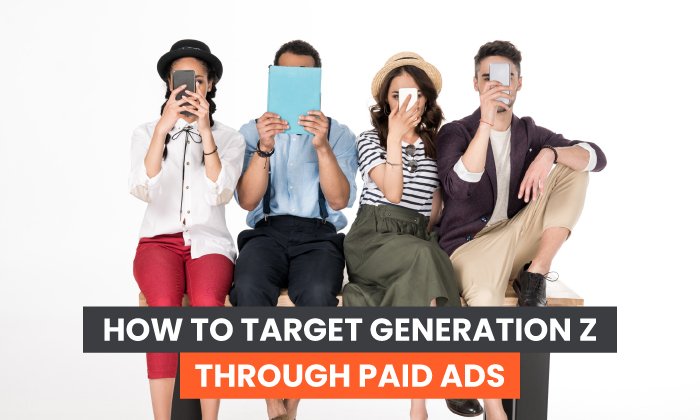 How To Target Generation Z Through Paid Ads

Target Generation Z Through Paid Ads! Because the oldest Gen Zers are reaching an age where they can make their own purchasing decisions, you have a whole new audience you can target with your paid ads.

Search interest in Gen Z has climbed so high that as of March 2021, searches for Generation Z surpassed searches for baby boomers and millennials.

In order for your ads to be successful, you need to understand the demographics and characteristics of Gen Z so you can tailor your campaign accordingly.

The ages of those considered to be in Generation Z vary by source.

To add to the confusion, there’s also different terminology used to describe them. While the name “Gen Z” appears to have stuck, this generation of young consumers is sometimes also known as the Zoomers, in contrast to baby boomers.

For this article, I’m using the definition from Pew Research Center, which categorizes anyone born from 1997 to 2012 as part of Gen Z.

What Is Unique About Generation Z?

Just as baby boomers were defined by the postwar world, Gen Zers have their own unique characteristics tied to the age they were born.

For starters, they’re the first generation to grow up with access to technology throughout their lives. In 1995, two years before the first Zoomers were born, just 44.4 million people worldwide used the internet. By 2000, that number had climbed to 413 million, before roughly doubling every five years up until 2015.

The oldest Gen Zers turned 10 in 2007, the year Apple launched its first iPhone. They’ve pretty much always had access to social media, with the first social platforms starting to gain traction in the mid-noughties.

They’re the most diverse generation in history. Just 52 percent of US Gen Zers are white, and almost one-quarter have at least one immigrant parent (compared to one in seven Millennials).

What’s more, despite the growing cost of college tuition, Gen Z are better educated than earlier generations. Of 18 to 21-year-olds who weren’t in high school in 2018, 57 percent were in college, compared to 52 percent of Millennials in 2003, and 43 percent of Gen Xers in 1987.

Perhaps as a result of their educational exploits, they’re also less likely to work in their teens and early 20s:

Why You Should Use Paid Ads to Target Generation Z

They might be young, but Generation Z is already impacting our economy. In the US alone, they spend an estimated $44 billion a year. Taking their influence on all household spending into account, their annual economic impact climbs to a staggering $600 billion.

So, you should be targeting them through ads, right?

Not necessarily. Generation Z isn’t the best target audience for every brand.

For instance, they don’t seem to like alcohol as much as older generations. Just 15 percent of drinking-age Gen Zers say they drink at least once a week, compared to 28 percent of Millennials and 36 percent of Baby Boomers.

They also watch less TV. They watch over 30 minutes less broadcast TV per day, and they don’t watch any more online TV than the average internet user.

While they might not be a fantastic audience for brands in the alcohol or broadcast TV spaces, there are definitely some things Generation Zers do enjoy.

For instance, they love gaming. Indeed, two-thirds of Gen Z males describe gaming as a core part of their personal identity.

More generally, they have very different ideas of “consumption” than previous generations. To them, the act of buying simply means having access to a product or service, not necessarily owning it.

Or, as consulting firm McKinsey puts it:

At this point, I’m going to assume your brand is relevant to Gen Z, and you’re eager to reach them.

With that in mind, here’s a word of warning: advertising to Generation Z is a double-edged sword.

They received their first smartphone at the age of 10.3 and spend an average of three hours a day on their mobile devices. As a result, many Gen Z experience ad exhaustion. They’re 12 percent more likely than average to use ad blockers, with 49 percent saying it’s because there are too many ads on the internet.

However, their buying habits suggest they’re actually extremely receptive to seeing the right sort of ads.

It boils down to this: if you target Generation Z with the right products, they might be more likely to purchase it in-store or through social commerce (if you offer it). With that in mind, in this section, I’ll discuss how to target them effectively.

First, a quick disclaimer—you should only target the oldest members of Generation Z. Just as a millennial born in the early 1980s may not share much common ground with one born in the mid-90s, there’s likely to be a lot of disparity between young and (comparatively) old Gen Zers.

These strategies are relevant to reaching young adults right now, but trends will change by the time the youngest Zoomers come of age.

Showcase Diversity in Your Paid Ads Targeted at Generation Z

I’ve already noted that Gen Z is the most diverse US generation of all time. Zoomers recognize and champion this, with 71 percent eager to see more diversity in advertising.

While they respond positively to authentic, genuine expressions of diversity, they immediately see through ads that latch onto it as a way to sell a product. As one respondent to a Facebook survey put it: “It has to be authentic diversity, not just brand image.”

Say you’re in fashion e-commerce. You should absolutely use diverse models and messaging, but don’t latch onto Black History Month or International Women’s Day to promote your latest flash sale.

This should be obvious—we’ve all been teenagers, after all. Yet so many articles about marketing to Gen Z talk about how they have the attention span of a goldfish.

Not only is that untrue, it’s also extremely patronizing. It suggests Gen Z are so obsessed with their phones or playing Fortnite, that they’re simply unable to focus on your brilliant ads.

In reality, Zoomers have better recollection of ads than Millennials or Gen Xers, particularly for skippable ads lasting less than two seconds.

Also, they’re the most educated generation in history and more comfortable with technology than their parents. If you don’t give them the credit they deserve, don’t expect them to buy from you.

Zoomers were raised on a diet of social media. Facebook is older than a lot of Gen Zers, so it’s hardly surprising they’re bored of it.

That’s not to say they don’t use Facebook at all; one-third check it on a daily basis. But they check lots of other channels, too. One in nine use TikTok every day, while one in ten are daily Discord users.

The lesson here is simple: to target Gen Z effectively, you need to focus on a diverse range of platforms, while keeping one eye on the “next big thing” in social media.

You might think your online presence should be geared toward selling your product and building brand awareness.

Two-thirds say it’s no longer acceptable for companies to stay silent on social justice issues, while three-quarters believe brands have more responsibility than ever to promote social justice.

What’s more, they’re open to brands joining in the conversation via the groups and communities they’re part of.

That means you should incorporate key issues like climate change and the Black Lives Matter movement into your messaging. But, don’t simply use it as a platform for selling—it has to be genuine.

Gen Z is just entering the workforce, so they typically don’t have a ton of money. What’s more, they were hit particularly hard by the 2020 COVID-19 pandemic in terms of job retention.

As a result, the older end of the Gen Z spectrum is much more financially aware. Because of this, you could get a lot of traction from targeted ads that demonstrate the affordability and value of your products.

Advertising to Generation Z can be a real minefield. Some advertisers get it exactly right, but unsurprisingly, lots of others don’t. Here are two examples of ads that get it spot on, and two that missed the mark.

Food delivery services saw big sales growth during the coronavirus pandemic. But with competition from the likes of Uber and Deliveroo, UK-based delivery service Just Eat needed to stand out.

Its answer? A collaboration with the rapper Snoop Dogg!

As a quick glance at the Billboard Hot 100 will tell you, Gen Z love a collaboration, and this ad certainly resonated, clocking up almost 13.5 million views on YouTube.

Take a look at the comments and you can see it’s gained the sort of response you’d typically expect from a “real” music video:

No one likes to be stereotyped, and Gen Z is no exception. Given that they make up more than one-third of the world’s population, it’s understandable they want to be seen as individuals, not all grouped in together.

Despite this, the British Army launched a recruitment campaign aimed at young adults, branding them “Phone Zombies” and “Selfie Addicts”.

That’s a tough sell. If a brand insulted me, I wouldn’t buy a pair of socks from them, let alone potentially lay down my life for them!

As an aside, 61 percent of Gen Zers describe themselves as “global citizens,” which suggests a career in the armed forces might not be a natural fit for them anyway, regardless of the advertising.

Fashion retailer ASOS launched a whole range targeted at Gen Z in which all the clothes are animal-free, sustainable, and gender-fluid.

As part of this, the brand ran a poll through Instagram Stories to ask whether clothes should be gendered, with two-thirds of respondents insisting they shouldn’t be.

This was effectively a double win. Not only did the campaign raise awareness of the Collusion line, but it also proved ASOS cares about the same issues as its audience, and understands the importance of expressing your identity.

Here’s an ad found on the subreddit /r/FellowKid, which is dedicated to naming and shaming terrible examples of Gen Z-focused marketing.

To be fair, Thortful does a lot of good advertising. It has a huge inventory of greetings cards, many of which are actually funny, but this ad is objectively pretty bad.

It smacks of an advertiser desperately trying to link their product to something that’s popular with a young audience.

Also, while the Fortnite bubble hasn’t burst yet, interest in the online shooter game was at its peak in October 2019. Thortful missed the boat on this one.

Remember, Gen Zers expect you to weigh in on social justice issues, and they want you to promote diversity. But if you do it inauthentically, they’ll run.

If issues like these aren’t central to your branding, it’ll be obvious you don’t practice what you preach—and that will drive away these young, savvy, conscious consumers. For help creating your Gen Z marketing strategy, reach out to our top-rated agency.

What are you doing to reach Generation Z through your advertising?