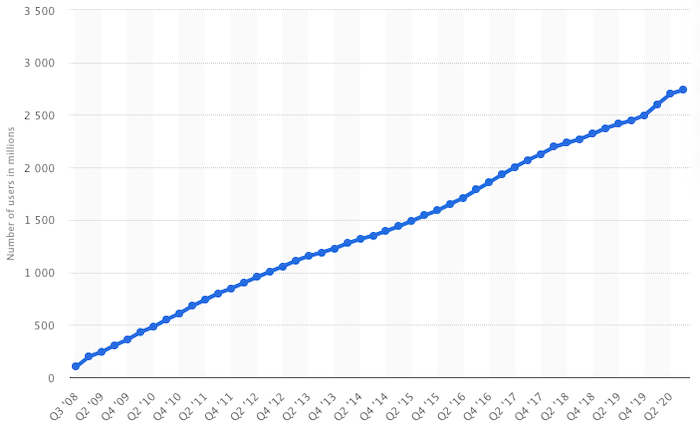 Why Paid Social Media is becomming ‘Pay to Play in 2021? It’s hard to believe now, but only a decade ago. The internet was awash with articles questioning how Facebook makes money.

No one’s asking that anymore.

Today, we understand advertising is the lifeblood of all the big social networks. Paid social media has become a key component of many brands’ marketing strategies. The more people these platforms have access to, the more money they make from businesses selling those people their products.

Just look at Facebook’s audience growth since late 2008. Despite a couple of small blips, it’s all up and to the right:

The net result? The platform’s annual revenues have climbed at an even sharper rate, with the vast majority of that money coming from ads:

This has had inevitable consequences for marketers. As social networks focus more and more on increasing ad revenues, it’s become ever harder to grow an audience organically.

Facebook gets the most criticism for this, but it’s the same with Instagram, LinkedIn, Pinterest, Twitter, and almost all other platforms; they don’t want you to reach your audience for free (at least, not easily).

Before I talk about why paid social media is so critical today, let’s be clear on the differences between paid and organic.

In a nutshell, organic social reach is all about creating and nurturing an audience without paid promotion. The specific tools at your disposal vary from platform to platform, but include things like:

Everything that involves advertising dollars is paid social media, whether that’s an integrated advertising campaign or a one-off sponsored post. Costs are often calculated on a per-click basis, although other methods are available.

Sure, paid social media costs money. But that doesn’t make it less cost-effective than organic social. In fact, weighing up the effort involved (and the results you can generate), it’s actually more cost-effective.

On Facebook, advertisers achieve average conversion rates of 9.21 percent. In other words, for every 100 interactions with your Facebook ad, nine will convert into a lead or sale. That’s a pretty impressive figure, and it’s even higher in some industries:

Of course, Facebook isn’t the only social network, and results vary by platform. For instance, on LinkedIn, advertisers shell out up to $8 for a single click.

That’s not to say LinkedIn isn’t cost-effective. Four in five LinkedIn members drive business decisions, and on average, it only costs about $2 per click more to reach a senior decision-maker than a junior employee.

If your marketing objective is to increase brand awareness, paid social media should be part of your strategy.

While the average cost of a 30-second TV ad slot during the Super Bowl has more than doubled since 2002, getting in front of your audience via social ads has actually become cheaper.

In other words, brands are paying less for their ads to show up in users’ feeds. From an awareness perspective, that’s fantastic news.

For instance, organic reach on Facebook is now just 5.2 percent, which means roughly one in every 20 fans sees your page’s non-promoted content.

If you have 10,000 followers, those organic posts you’ve lovingly crafted will only reach about 500 of them.

How to Improve Your Paid Social Media Results

Still with me? Then it’s a safe bet you’re bought into the value that paid social media can deliver.

Just because Facebook and Twitter want you to invest your marketing dollars with them doesn’t mean you’re guaranteed success. I’ve seen plenty of brands burn through huge advertising budgets on social only to see terrible results because they didn’t get their strategy right.

Fortunately, I also know a bunch of brands that have made intelligent use of their budget, investing in the right platforms at the right times, and capturing a ton of leads or sales. Here are four tips to help you do the same.

I’ve already noted how brands are spending more and more on social ads. In fact, revenues across all social platforms in the US are expected to reach almost $51 billion in 2021.

It doesn’t take a genius to work out that with more and more money being invested in paid social media, it’s becoming harder for brands to stand out.

That’s so much activity! To cut through the noise, your content can’t just be good; it needs to be exceptional.

There’s no such thing as the perfect piece of content for social media, because the audiences are so different.

What works on LinkedIn, a platform packed with senior B2B buyers, is unlikely to resonate on TikTok, which is famously popular with teens and young adults.

However, we know what works on specific social platforms. One study reviewed 101,421,493 posts across Facebook, Instagram, and Twitter, and unturned some useful (and often surprising) statistics. For instance:

Meanwhile, over on LinkedIn, thought leadership drives the best results.

Decision-makers are spending more time each year consuming thought leadership content, with most doing so for at least one hour a week. The quality of this content is all-important, with most saying they only gain value from it about half of the time.

The lesson here is that a one-size-fits-all approach to social content won’t work no matter how high your ad budget. Rather than trying to incorporate messaging that resonates across all platforms, concentrate on what the audience on each individual platform wants to see.

However, one tactic does appear to work equally well across all social platforms: video.

A staggering 96 percent of marketers have run video ads on social, and 91 percent say they’re satisfied with the return on investment they achieved. What’s more, 93 percent of brands have acquired a new customer because of a video they ran on social media.

In baseball, if a hitter fails seven times in 10, they’re one of the best in the game. Even the greatest of all time technically fail more than they succeed.

Marketing is similar. However brilliant your technical skills, however great your content, and however well you know your audience, you’re not going to get it right every time.

In fact, you should be open to getting it wrong, because that’s how you find out what works.

If you just run the same old campaigns, targeted at the same audience, time after time, you’ll see the same old results. Actually, your performance will get worse over time, because people get bored of seeing the same ads over and over.

A/B testing helps you figure out what works (and what doesn’t) so you can improve your paid social media performance.

There are a lot of misconceptions about A/B testing. People often assume it’s about running two totally different ads simultaneously, then declaring a winner.

In reality, differences should be kept to a minimum, with only one key element changed.

Otherwise, how do you know why one ad performed better than the other? Tests don’t need to be limited to two variants at a time. In one particularly obsessive example, Google famously tested 41 shades of blue before settling on the color of its toolbar.

You likely don’t have Google’s resources, so keep things simple to start. For instance, try testing:

Even with a limited ad budget, you should generate enough impressions and clicks to declare a winner after two weeks. Keep the top performer, ditch the other variant, then introduce a new element to the test. Rinse and repeat!

3. Design Your Posts for Mobile

When it comes to our social media, mobile is king. Four-fifths of Facebook users exclusively access the site via mobile, while just 1.7 percent use a laptop or desktop.

Creating mobile-first social ads isn’t rocket science. For non-video ads, you just need to follow the design specifications for your chosen platform; here are four of the most common:

Things get a little trickier with video ads because you’ll need to tap into the headspace of a user viewing your ad on mobile. Consider these best practices:

4. Research Your Audience Before Choosing Your Platform

Unless you’ve got Nike’s marketing budget, you likely don’t have the resource to focus on every social channel at once. Also, it probably doesn’t make sense for you to advertise on every channel; it’s much better to focus on the platforms that make the biggest impact.

Researching your target audience allows you to understand where they hang out online. Using tools like Google Analytics and Facebook Audience Insights, create a profile of your average customer (or multiple profiles, if you have several types of customers), considering factors like:

Next, it’s time to choose the social platform that aligns most closely with your customer profile. Fortunately, there’s a huge amount of data available on the audience makeup of different social platforms.

For instance, a Pew Research Center survey provides a ton of useful information about the audiences of Facebook, Instagram, and LinkedIn. Here’s what this data tells us:

We’d all love to get something for nothing. Unfortunately, the days of the big social networks letting us grow and engage our audiences free are quickly vanishing. Unless you’re consistently able to go viral, organic social just won’t get enough eyes on your content.

That means if you’re yet to integrate paid social media into your wider marketing strategy, it’s absolutely time to start. It’ll drive awareness, sales, and leads in a way that organic social simply can’t (at least, not anymore.)

What’s the number one objective you want to achieve with paid social media?